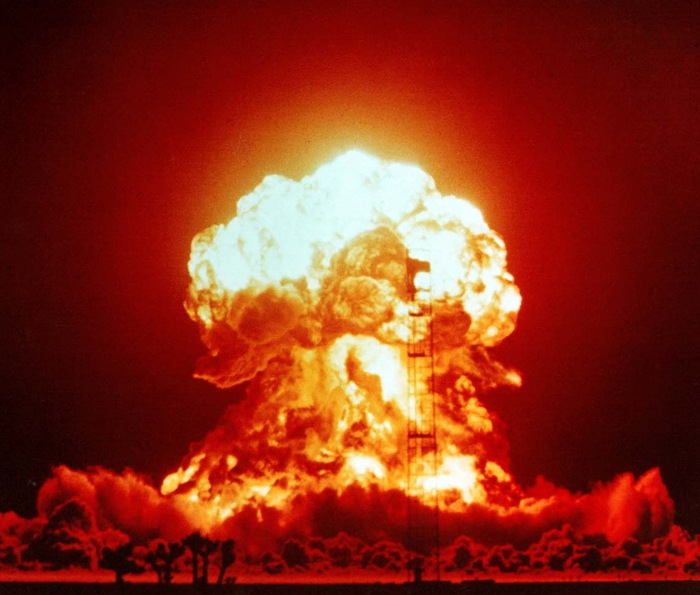 Sad that an important video gets 570 views to date. Maybe that says it all: humanity is too stupid and careless. With respect to disarmement: the situation in the world is such (in my opinion) that if the USA disarmed 100% without any claim on any other state, Russia would disarm themselves in response. USA started this, only USA can end it. However, USA will not end it; I expect that USA will destroy the world and itself with it.

The point I wished to make however is that I think it is a mistake to think that you can have the kind of economy we have, which is so ill conceived that it has to produce a criminal Plutocracy, and expect anything other than a pure form of evil as a Government. The way the Plutocrats need war to destroy the morality of the population, to prepare for the fall of the Republic with their dehumanized front troops, the way they use war to enlarge profits for themselves at the cost of their own population, this has now lead to the new weapon, which is merely one in many. To think you can ask this system of Plutocracy to do away with nuclear bombs is to try to find a medicine for a bubonic plague so that the swelling lumps are less ugly, yet the patient still dies. The key to ending this threat to humanity is to cure the underlying disease, which is economic imbalance.

The economic imbalance is a systematic part of the economic system, caused (in my opinion) primarily by a much overlooked ill: markets in land. “Markets in land,” people think nothing of it, indeed they think it is a good thing. However it is a horrible mistake, which goes against economics basic theory: price balancing is depending on the human effort which goes into making the good. Since you are smart people, I expect you to take a hint and think things through yourselves. It really is not that difficult to figure out. (I wrote a free public domain book about it, which goes into extreme detail, including a draft Constitutional model for a balanced economy and State.)

I think that what we will get next in weapon systems is robotics, and such devices can then be used for the perfection of the art of tyranny. Perhaps IBM will again be instrumental in a diabolical regime to make that happen, just as with the Nazis. The general population has nothing to gain from all this war evil, and therefore there might be some hope that if there is more democracy in both the economy (where the “vote” equals your inalienable right to natural resources), and in the State (where we obviously need an efficient system to do away with liars the moment they start lying and not having to wait 4 years before their abuses can theoretically be stopped), that humanity will stop with at least some of its wars and insane weapon systems. However I think such a chance is unlikely to come about, until after the nuclear war.

We will therefore have to think like nuclear war as a political opportunity, an opportunity like there never was one before. There is no stopping this insane and evil humanity, the level of stupidity and apathy just does not allow it. They will destroy themselves. Look at history, look at the behavior and how nothing has changed. Right now we are still in a period of unusual justice and rights. It was more common that everyone having an opinion divergent from the King and speaking out would be killed. We already are at the peak that this evil and stupid humanity is capable off, from here on out it is all down hill into Naziism, major warfare, massacres and the rest of it, until this culture is dead because the people are dead. Did the Roman Republic ever recover from Ceasar and Nero, which might be in a replay today between Obama and Trump (not necessarily in that order) ? Did the Weimar Republic recover after its fall, than until it had annihilated itself in a hopeless war ? No: after the Revolutionary peak during which the Plutocracy sees itself forced to make some concessions, it is downhill until the catastrophe is so great that the people will again wage a Revolution based on some higher principles. The pace of collapse can be slowed, but is unlikely that it can be turned around.

The people do not even deserve it. The people need their evil and apathy to blow up in their face until they take notice. They need to learn: yes, you may not watch sports on TV all day, causing you to loose your attention for the commons; yes, you may not spend all your excess money on luxury vacations, when there are people in need; and yes you may not gossip all day about other people behind their backs, because if you do than so you deserve to live in a world where the major States will do the same, which takes the form of war propaganda, and then war. They deserve to live through the nuclear war, and to die in it, horrible as it may be. This is what we deserve as humanity, because our behavior did not live up to the standards that our technology demands. Moreover, even if a good system could be installed at the snap of a finger, a self obsessed egomaniac – of which there are many in the world today – is not going to even make a success out of it anyway. The suffering brings out the best and the worst in people – as is often said – and after that it will be a case where good people need to overthrow the worst, and only after such a mass action may there be the necessary cultural impetus to keep a new and better culture alive for some time.

Therefore: harden your personal condition, while remaining civilized and knowing exactly what to do when the chance arrives. Nuclear World War is not The End, it is The Beginning. Even if that might be speculative, it is a duty on all moral and good people to think of it that way, because there is no other honorable way to think about it. Let’s do it and get on with it right now. The clock is ticking loudly now …

P.S. Markets in land are for an economy what vote buying and bribing representatives is for a State. It ruins the system.