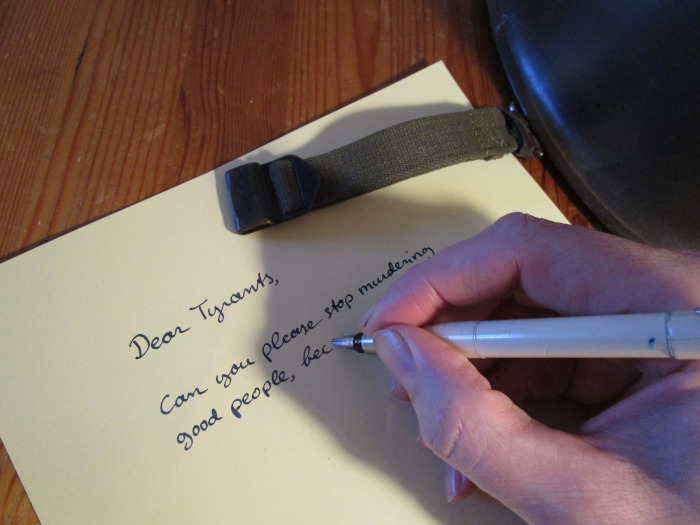 You can put a poster behind your window, like I did. Simply his name, you can print it out right now if you have a printer, or even draw it by hand. We have to set up organizations specifically to protect everyone their right to free speech and assembly, against murder. In principle I see these organizations as militant organizations, with military type training and behavior – because we would be aiming ourselves against murderers, who are violent.

However when there is not yet outright death squads or large scale military violence, it is wise to make the operations more civil, so as not to cause the problem and give the tyrants an excuse to escalate. Hence you would start these organizations right now in the UK for example, as purely civil organizations who do things like send letters, etc. The next step could be to be there around the next victim of western fascism, some journalist or whomever, which could be to physically be there to stop violence, and/or with cameras to record the truth, and just put in an effort. At the same time, these groups could engage in army / police type training, equipment to the degree legal, etc.

A system like this will be easily radicalized and misused by some people (particularly hyperventilating youth). Youth should be rejected as members immediately. I do not see a system like this as being “against the police” or “against the system.” It can and should work with the police, where possible, because much of the police are also merely ordinary people who might not agree with the policies of the criminals in power. It is important to know when to act, when the population generally supports what level of activity.

Most people may be zombies and actively belief that Julian Assange is a terrorist (!). This makes it very hard to oppose tyranny in a democratic sense with military means (like freeing Julian Assange by force, and outright fight the security forces who have chosen to stand with this tyranny). Can such a fight be won ? I do not think right now it can be won. The UK will immediately set the army on it or whatever is necessary, and neutralize everyone. The population is not ready to support such an action, I fear. The fight will not even manage to get off the ground, as there will for sure be a large amount of infiltrators. In the end, Julian Assange will only be even hit harder by such a failure. It has always been essential to choose the right movement for such and other Revolutionary activities.

We can however organize and prepare, within cultural and legal frameworks, which already sends a signal to certain people who might be on the fence in this society as to whether they want to support tyranny or a democracy under law. If we organize and train, and reject extremists and the usual agent provocateurs, it could lay a base for useful future activity to protect civil politics against tyranny and fascism. This whole thing is difficult however, because at first it might attract unhinged people, police infiltrators, and even small time crooks. It is therefore even important to wait for the right moment to start such an organization, at a time when ordinary well meaning people are starting to see the need, to such an extend they want to at least do something (as we see in the comments here). Only then will it be possible to attract enough of the right kind of people. Such people have characteristics like: no history of crime whatsoever, working (or work willing) people with good ethics, and people who are mature enough to understand that there is evil and good in just about every ideology, culture and sub-culture.

I think these organizations should commit to a democratic council representative model, because it is too dangerous to allow a few persons to control an organization like this. The enemy will put all their effort into controlling the top positions. Members can divide into small voting groups, and these groups choose a representative for a council. This can be stepped to allow for large sizes. The council then appoints the commander(s), and then the commanders run the organization in military / police style from the top down. It would be very good if policemen and even military people would join the organization. If they later prove to be traitors and work for the tyrants, they can always be asked to leave.

This only deals with safeguarding against tyranny. It is not a Revolution, and it shouldn’t be because it is militarized, which tends to create a military regime if it becomes Sovereign. To engage in politics or Revolutionary Government, it requires yet other organizations and methods, which I think need to be separately created and run differently. (market.socialism.nl)